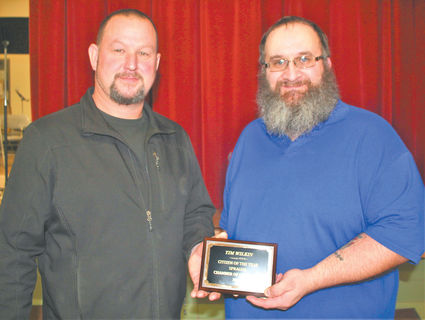 Chris Canaday, left, presents Chamber of Commerce President Tim Wilken with the 2019 Sprague Citizen of the Year award during a ceremony Jan. 20 at Sprague Elementary School.

"This gentleman has been life-long in Sprague," Canaday said during the presentation of the award.

According to Canaday, the 35-year-old Wilken has been instrumental in city improvements and is always willing to help out.

Canady cited the flood of 2017 in which Wilken spent days helping residents fill and place sa...