Senate Bill 6077 would make it illegal to purchase, possess 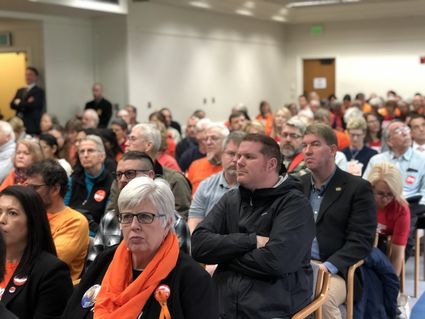 Gun control supporters and opponents packed a Senate committee hearing Thursday as members took up a bill that bans magazines of more than 10 rounds.

OLYMPIA -- Ammunition magazines that hold more than 10 rounds would be illegal to purchase or posses in Washington under a proposed law moving through the state Senate.

Supporters cite safety concerns, while opponents argue the measure, which cleared the Senate Committee on Law and Justice on Thursday, Jan. 23, would place new restrictions on residents' constitutional right to bear arms.

Senate Bill 6077, sponsored by 14 Democrats, would define 10-plus-round magazines as "high capacity" and make them illegal to possess or use.

Current owners would be exempt from prosecution for continuing to possess them. There would also be exemptions for law enforcement, military personnel, licensed gun dealers and other firearm professionals.

"Today, our children are forced to prepare with active shooter drills for the very real possibility of gun violence occurring in their classrooms and, sadly, students are attending their classmates' funerals," said Sen. Patty Kuderer, D-Bellevue, the bill's primary sponsor.

High-capacity magazines allow a shooter to fire numerous bullets without stopping to reload, she said.

The bill defines "high-capacity magazine" as any ammunition-feeding device with the ability to hold more than 10 rounds.

Ami Strahan, whose son died in a school shooting, testified in support of the bill at the Law and Justice Committee hearing on Monday, Jan. 20. Her son, Sam Strahan, was killed in 2017 at Freeman High School in Rockford near Spokane.

"While I find myself saying thank goodness he was the only one, I also can't fathom that that sentence has become acceptable in 2020," Strahan said. "When did it become OK that one kid died at school?"

Opponents say a ban on high-capacity magazines would put their ability to defend themselves at risk.

"It's a woman's right to own firearms for personal protection because it levels the fight," said Jane Milhans, a certified firearms instructor and home-invasion survivor. "In a personal defense situation, it may take more than 10 rounds to stop a threat. Should it take more, this bill puts women at a dangerous risk of being defenseless."

Some argued guns are not the problem in Washington, mental illness is.

"We seemed to have evolved into a situation in society here to where the mental health issues underlying the people wanting to engage whether they have one bullet or two bullets or 100 bullets out there becomes the issue," Sen. Jeff Holy, R-Cheney, said.

On Friday, Jan. 24, the bill was passed to the Rules Committee for a second hearing.