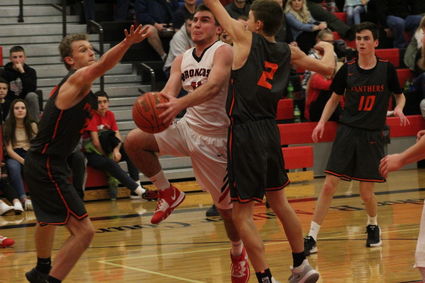 Senior guard Austin Thompson drives to the basket in the Broncos' 67-49 home league win against Asotin on Jan. 3. Thompson finished the game with 19 points.

What a difference a year can make for the Lind-Ritzville/Sprague Broncos basketball program.

Just one year removed from a season where the team went 8-15 with an early exit in the conference tournament, the Broncos matched last season's win total with a 43-31 win in Reardan over the weekend, which followed a 67-49 home victory over Asotin the day before.

Offensively, the Broncos were led by the same trio of players in both games; seniors Austin Thompson and Spencer Gering, and junior Drew Kelly. Of the 110 points that the team scored in the two wins, the three combined to score 97 of those...