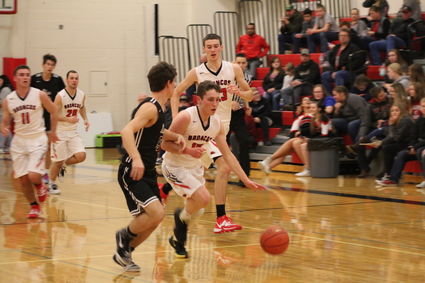 Junior Carson Ayers dribbles with intent during the Broncos' 73-39 win against Upper Columbia Academy on Dec. 12 at Gilson Gym. Ayers had eight points in the win, including two three-pointers in the first quarter.

The Lind-Ritzville/Sprague Broncos basketball team opened league play with a bang on Dec. 12, coasting to a 73-39 victory over the Upper Columbia Academy Lions at home.

The Broncos, improving to 3-1 overall on the season, were led offensively by senior Austin Thompson, who scored a career-high 31 points in the victory. It appears to be the most points scored in a game by an LRS player in this decade.

Thompson was 4-8 from beyond the arc in the game, and also converted several three-point plays the old fashioned way. He shot 12-19 overall from the field and was 3-5 from the foul line. He als...