A staple of the Ritzville community, the Giving Tree enters its fourth decade 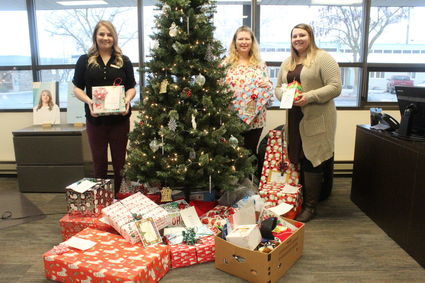 Umpqua Bank staff hold up presents from the community that have been returned to this year's Giving Tree. The Giving Tree is entering its fourth decade this year, and allows the community to help aid less fortunate families during the holiday season. From left: Store manager Danielle Bolin, Teresa Ryan and Emily Kinney.

It's been a fixture of Ritzville for as long as many people can remember, and now the Giving Tree enters its fourth decade of service as a way for the community to help aid less fortunate families during the holiday season.

The Giving Tree was founded back in December 1989, when George H.W. Bush was in the first year of his presidency, the Soviet Union still existed, the No. 1 song on the Billboard Hot 100 was Billy Joel's "We Didn't Start the Fire," Taylor Swift had just been born, and "The Simpsons" had just premiered on FOX.

The program was undertaken by Wheatland Insurance Agency's Marv...