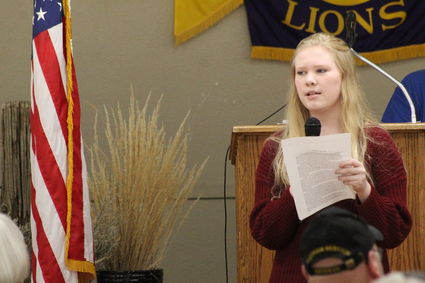 Raegan Snider reads her essay on why she believes the United States is a great country at the VFW essay awards program on Dec. 7. Snider is participating in the Voice of Democracy contest, which has a national grand prize of a $30,000 scholarship.

The Veterans of Foreign Wars Post 1146 held its annual essay awards program at the American Legion Hall last Sunday afternoon, highlighting students from fourth through ninth grade who participated in the contest.

Students from area schools were invited to participate in the contest, and the first place winners read their essays in front of the audience, which included members from the VFW and American Legion. The program was moderated by Dennis Greenwalt.

Fourth and fifth graders were prompted with the question of how they would encourage respect to the flag of the United States. The fourt...