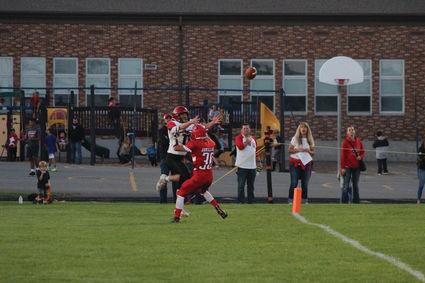 Senior Austin Thompson fights for the ball during the LRS Broncos' opening-season game against Davenport on Sept. 6. Thompson was one of four LRS players to receive league honors during the 2019 season.

On offense, senior linemen Cole Cameron and Spencer Miller were named to the All-Opponent 2nd Team, as was senior running back Spencer Gering. Gering was named to the team for his contributions as a receiver. On the season, Gering caught 41 passes for 430 receiving yards and three touchdowns. His best game of the season was against Asotin on Senior Night, when he caught 10 passes for 140 yards and a touchdown.

On defense, Cameron was also named to the All-Opponent 2nd Team....