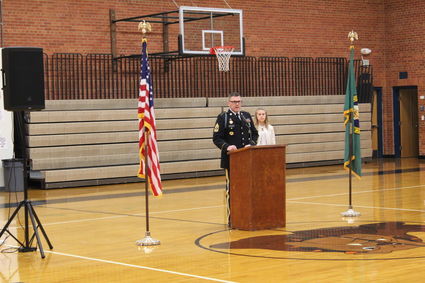 Command Sgt. Maj. James Blackheart of the U.S. Army speaks during the Lind-Ritzville Middle School Veterans Day Assembly on Nov. 6. Blackheart's speech focused on his life in the military and the importance of education.

Students from the Lind Elementary School walked with their teachers down the street last Wednesday to the Lind-Ritzville Middle School to join students there for the middle school's Veterans Days Assembly.

Blackheart told stories of his life in the military, but stressed that he wasn't there to recruit anyone.

"I was telling Principal Lembcke I am not going to make this a recruitment pitch," Blackheart said. "Because it's not. What it is, is my life and my experiences."

He also talked about the importance of education.

"It's such a blessing to have education here in the United States. A lot of countries don't have that."

The assembly started with the LRMS band playing the national anthem. Student body members welcomed everyone and introduced the local area veterans in attendance. They also gave a history of veteran's day and its beginning as Armistice Day.

Galbreath also focused on education in her speech.

"America is a great country because we have the privilege of education," Galbreath said. "Abraham Lincoln once said, 'Upon the subject of education, I can only say that I view it as the most important subject that we as a people can be engaged in.' With the free education, people get jobs and careers that make up the heart of America."