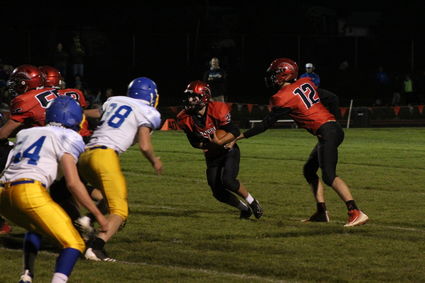 Quarterback Drew Kelly hands the ball off to running back Spencer Gering. Gering had a 30-yard touchdown run in the team's 35-13 loss to Reardan.

The Lind-Ritzville/Sprague Broncos football team found themselves in a dogfight at the half against the Reardan Indians, but faded in the final two quarters to drop it's fourth consecutive game of the season, 35-13.

The Indians got on the board first, as running back Cody Sprecher ran for a 70-yard touchdown run on the game's second play from scrimmage.

The Broncos would tie things up in the early moments of the second quarter, as its defense came up with a clutch play. A Re...