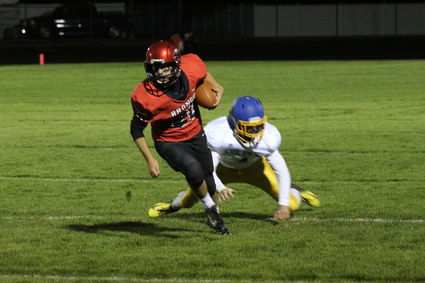 LRS running back Spencer Gering breaks a tackle for a nice gain in the first quarter of the game against Colfax on Oct. 11 at Jimmie Snider Field in Ritzville. The Broncos lost the game, 39-13.

League play got off to a less-than-desired start for the Lind-Ritzville/Sprague Broncos football team last week, falling 39-13 to the Colfax Bulldogs in Ritzville on Oct. 4.

The Broncos (0-1 in league play, 1-4 overall) had opportunities to score in its first two possessions of the game, but were unable to capitalize and ultimately keep pace with a Bulldogs team that led 33-0 going into halftime.

On the game's opening drive, the LRS offense drove down into the red zone after starting with good field position. The drive stalled at the 17 yard line, however, after an incomplete pass on fourth down.

Colfax didn't take long to get on the scoreboard-one play, exactly. The Bulldogs ran a trick play that included a reverse to a wide receiver, taking the Broncos by surprise as the visitors ran it 83 yards for the score to go up 6-0.

"They're pretty smart coaches," said LRS head coach Greg Whitmore, who added that they spent time in practice preparing for trick plays from Colfax. "We told our kids they'd probably run some trick plays, and some of our kids got a little bit undisciplined and followed the ball too much and didn't stay home for their responsibilities."

LRS started its next offensive possession at its own 35 yard line, and quickly found itself in a long third down situation. Junior quarterback Drew Kelly found senior running back Spencer Gering on an 11-yard pass to bring up fourth down and two yards to go. After calling a timeout, the Broncos converted on another connection from Kelly to Gering, getting just enough for the first down and extend the drive

But with the football near midfield, the Broncos turned the ball over after Kelly fumbled as he was trying to hand the ball off to a running back. Colfax took over at its own 49 yard line, and scored three plays later on a 42-yard run on third down, leading 14-0.

Colfax would go on to score on its next three possessions in the first half while stifling LRS on defense. The Broncos' first points of the game didn't come until the fourth quarter, when both teams had pulled their starters from the game.

"We were outmatched," said Whitmore. "We're playing a lot of freshman, we're playing sophomores that really didn't get any experience last year as freshman, so they're just a little bit older but still inexperienced. When you play a team like that, that's experienced and way faster than us, stronger than us, you get a result like that."

LRS' first touchdown came with just over eight minutes remaining in the game, when freshman wide receiver Cooper Miller ran the ball into the end zone from eight yards.

With just under two minutes left to play, freshman quarterback Hunter Dinkins completed a seven-yard touchdown pass to running back Hayden Melcher, a fellow freshman, to cut Colfax's lead to 39-13, which would end up being the game's final score.

The opportunity for underclassmen to get playing time in a varsity game was one of the few highlights for the Broncos on Friday. Whitmore said that Colfax had to cancel the scheduled JV game between the teams, and that Reardan-this week's opponent-also had to cancel the upcoming JV game.

"In the end it ended up being at least a quarter of a JV game," said Whitmore. "Any little bit helps for some of our same kids who were playing in the varsity game. Now they're playing against kids their age and a little bit more of their skill level."

In the game, Colfax racked up over 500 yards of offense, 400 of which came via the running game. The Bulldogs averaged 10.3 yards per play on offense, and converted six of its nine third down attempts. 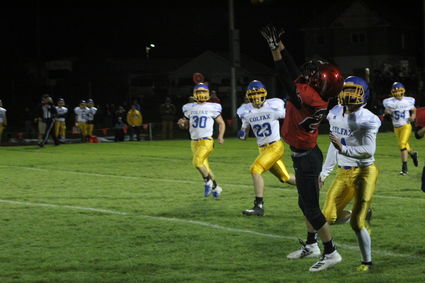 A pass from quarterback Drew Kelly is just out of reach for Broncos wide receiver Cooper Miller in the first half of the team's loss to Colfax. Miller would score on a touchdown run in the fourth quarter of the game.

Offensively, the Broncos compiled 215 yards, 118 of which were on the ground. Five LRS players rushed for more than 15 yards, led by senior Austin Thompson, who had 32 rushing yards on 11 attempts. Miller also had a 17-yard run to go with his touchdown run to finish with 25 yards on two attempts.

Kelly finished the game 10-19 passing for 51 yards and an interception, while Dinkins was 4-4 with 46 yards and a touchdown pass in the fourth quarter.

Up next for the Broncos is another, league game on Oct. 11, this time against the Reardan Indians on the road. Reardan started the season firing on all cylinders, going 3-0 with non-league wins against Northwest Christian, Davenport and Kettle Falls.

But the Indians have struggled in its last two games, falling 14-6 to Chewelah on Sept. 27 and 38-0 to league foe Asotin last week. Whitmore noted that Reardan has been without a key player, senior running back and linebacker Tyler Sprecher, due to injury and his availability for the game tomorrow is currently unknown.

Kickoff for tomorrow's game is scheduled for 7 p.m. in Reardan.