The building, which was finished in time for the beginning of the school year, features many technological upgrades 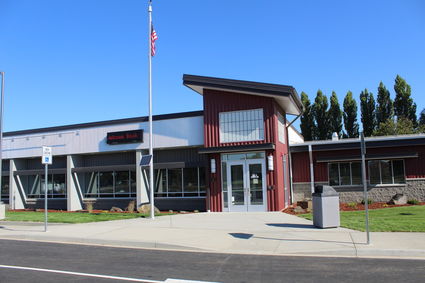 The exterior of the new Lind-Ritzville High School building. There is plenty of new technology in the building, including electronic white-boards and an updated intercom system.

Lind-Ritzville High School students are back at school in a newly rebuilt building. The building, however, is not the only thing that is new. It also comes with a lot of new technology. Andy Jones, the district's IT man, was at the school board meeting on Aug. 26 to update the board on the features that the school will have.

"The network is probably the most unique thing," Jones said. "In a traditional network, you have a server room somewhere, and you have hundreds of copper wires going throughout the building. Now, we have three strands of fiber, because everything goes over fiber. That fiber goes to three locations in the building and more fiber to the classrooms."

Jones said the new network saved the school a lot of money on construction because it didn't need the copper wires. He said the network will also be very reliable.

"This is the same technology that Verizon and Comcast is using to deliver internet and TV service to homes," Jones said. "We got the idea from Washington State University. And the Pullman School District did it at their new elementary school. So we got a lot of input before we jumped in, because you never want to be the first person."

Jones also showed the board new audio and video systems in each classroom that teachers will be able to use to show video learning programs to students. There are speakers in the ceilings. The system includes microphones that teachers can wear and places for hearing impaired students to plug in headsets.

The classrooms also now have e-boards. They are electronic whiteboards that don't use real markers. They can also be connected to computers and what you draw on the board can be saved.

Another highlight of the new technology is in the band room.

"It has a system that has mics hanging everywhere so they can actually record music," Jones said.

The intercom system has been updated so administration can contact teachers in the classroom without the use of cell phones. Jones said he has more things he wants to accomplish with the intercom system.

"Eventually we'd like to have it tied into our lock-down system, so if a teacher hits a button, we are locked down," Jones said.

Jones also showed the board new cameras for the security system. He said he installed them himself because the quotes they received were all high.

The cameras can be viewed on a mobile app, and police can have live views of what is happening in the school.

Throughout the building, lighting is all motion controlled. Some outlets are also motioned controlled and will turn off when the lights turn off.

The building is keyless. Staff members have access cards for entry into the building.

Jones said this is helpful because it makes restricting access to a certain person easier. First, unlike a key, a card can simply be deactivated. When a card is active, it can be set to only allow access at certain times. So, for example, one person may have 24 hour access everyday, while another may only access the building Mondays and Tuesdays from 9 a.m. to 1 p.m.

Jones was recognized at the meeting by the board for his work on these upgrades over the summer. He is also working on improving technology at other LRS schools.