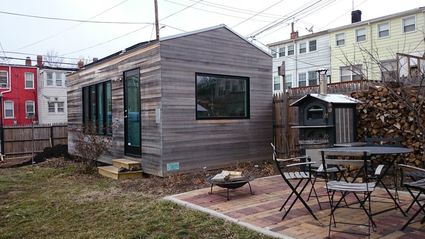 A quorum was present for the Lind Town Council meeting on the evening of March 15, as discussion centered around the Town's water system and tiny house zoning. Kathy Vedder was not present but was monitoring via speaker phone.

Steve Nelson from Century West Engineering made the council aware that Lind had qualified to apply for a Community Development Block Grant, and that the Town intended to apply for the maximum amount available, $750,000.

The proposed use for the funds was to upgrade and make repairs to the Town's water system. Typically, grants are given priority to communities who propose addressing: 1) public health; and 2) safety.

Four projects will be included in Lind's proposal: 1) Replacement of the water main under 7th Street, which at 2.5 inches is too small to support fire fighting; 2) Water meters on properties along 6th Street to be moved out of basements and relocated at the property front; 3) Replacement of two segments of water main; and 4) Installation of a variable-frequency drive on Well No. 8.

The new drive is needed if Well No. 7 goes down, then Well No. 8 would be on full power and would create water problems elsewhere in town. The variable-frequency drive would mitigate those problems by adjusting the water pressure. The application for the grant is due June 5, and if awarded, the Town would know in September.

Nelson also advised the council that proposed street projects will not begin until after the Combine Derby. He also made councilmembers aware of an Infrastructure conference in October that includes funding agencies who listed to technical teams and help with applications for grant monies. He made a strong case for the conference benefitting councilmembers. The council later approved a motion to allow Mayor Paula Bell to make reservations for councilmembers to attend the conference.

Mayor Paula Bell asked if there were any volunteers to help design a new Welcome to Lind brochure. Councilmember Rose Elkington volunteered to help update the existing brochure.

The council also listened to a request from Cheryl Haase on behalf of the Chamber of Commerce to again use barrels and cones to block out the route of the upcoming parade, same as was done last year. The parade route will be blocked off for four hours to accommodate the kid's parade as well as the main one. The councilmembers had no objections.

Haase also requested permission to plant a pine tree in a corner of the Community Garden. The tree is to be dedicated to the memory of Richard (Butch) Phillips by the Chamber and Community Garden in a ceremony on June 29. The council's questions and concerns were properly addressed and permission was given.

The council also addressed a request to add a minimum size home allowed to be built under the Zoning Ordinance. After considering various sizes, a motion was made and passed to limit new construction homes to 20-feet by 30-feet, or 600 square feet, at a minimum. The council also reviewed and approved a request from Mike and Tammy Doyle to place an accessory building on their property.