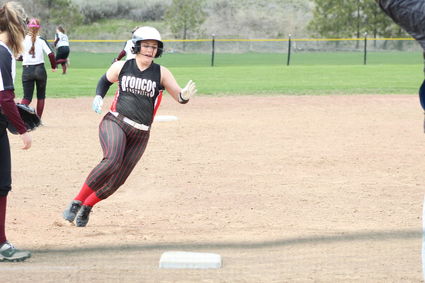 Sophomore Sadie Miller rounds third and heads for home in the first game of the Lady Broncos' doubleheader against Reardan on April 16. LRS swept the doubleheader to improve to 3-3 in league play on the year.

The Lind-Ritzville/Sprague Lady Broncos softball team had a mixed bag of results last week, sweeping one league doubleheader while getting swept in another.

The Lady Broncos started out the week on fire, sweeping the Reardan Indians in a home doubleheader on April 16.

In game No. 1 of the doubleheader, the LRS offense broke out the bats in the fourth inning, scoring 11 runs to help power a 16-6 victory over Reardan. The game was tied 3-3 heading into the bottom of the fourth, but the Lady Broncos broke it open and was eventually able to 10-run the Indians, winning in six innings.