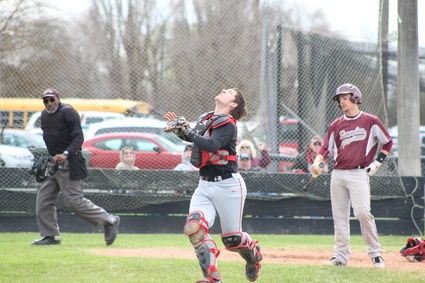 Lind-Ritzville/Sprague Broncos catcher Spencer Miller settles under a pop fly in foul territory in the first game of the team's doubleheader against the Reardan Indians on April 16. LRS swept Reardan and went 3-1 in league play on the week.

The Lind-Ritzville/Sprague Broncos baseball team went 3-1 in league play last week, sweeping the Reardan Indians at home on April 16 and splitting a road doubleheader against the Liberty Lancers on April 20.

The Broncos end regular season league play with a record of 3-5, and will play two more non-league doubleheaders before postseason play begins.