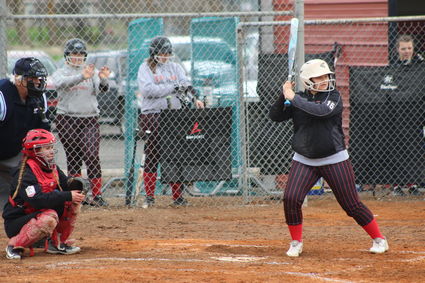 Senior Lacey Miller waits for the pitch in the first game of the Lady Broncos' doubleheader against Mary Walker on April 9. LRS lost both games, but Miller went 6-7 from the plate in the two games, including three doubles.

It was another week of play spoiled by weather for the Lind-Ritzville/Sprague Lady Broncos softball team, as their league doubleheader against the Reardan Indians scheduled for April 13 was postponed due to rain.

The Lady Broncos did manage to get one doubleheader in last week, a non-league tilt at home against the Mary Walker Chargers on April 9. LRS lost both games on the day, with both games being high-scoring affairs.

The first game of the doubleheader was the highest scoring game all season that LRS has been a part of, losing 14-21 to Mary Walker. A seven-run explosion in the third inn...