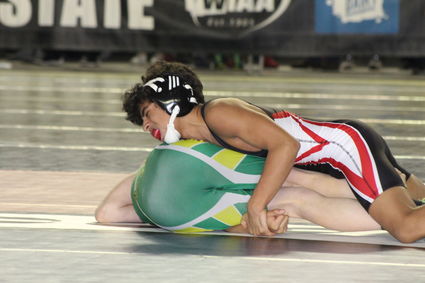 LRS freshman Johnny Ryan controls the legs of Cody White of Liberty Bell in a 106-pound consolation match at the Mat Classic in Tacoma last weekend. Ryan and three other Bronco teammates participated in the State Tournament.

A long and winding season came to an end for the Lind-Ritzville/Sprague wrestling team, as four grapplers put up a tough fight at the Mat Classic in Tacoma last weekend.

None of the LRS wrestlers were able to place at the State Tournament, although three of the four competitors for the Broncos won at least one match at the two-day event held at the Tacoma Dome on Feb. 15 and 16.

In the 106-pound weight class, freshman Johnny Ryan had been awarded a first-round bye to start off the tournament. In the second round, Ryan faced off against Pateros wrestler Ramiro Ambriz, narrowly beating him 8-...