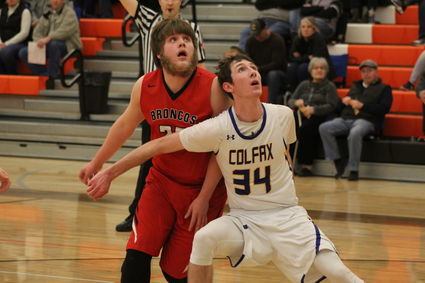 Above, Broncos junior Cole Cameron fights for positioning as he tries to grab a rebound in a postseason game against Colfax on Feb. 7. The Broncos' season ended on Feb. 13 in a 48-40 loss to Reardan in their third game of the Northeast 2B Conference Tournament

The Lind-Ritzville/Sprague Broncos basketball season came to an end last week, as the Broncos were eliminated in their third game of the Northeast 2B Conference Tournament.

After three consecutive postponements following LRS' loss to Colfax on Feb. 7, the Broncos finally took on the Reardan Indians on Feb. 13. Due to less-than-ideal road conditions caused by inclement weather that blanketed the region, the game was played in Davenport instead of West Valley High School, where the tournament was being held.

The Broncos went 2-0 against the Indians in the regular season, but came out flat off...