"Box for Sox" a smashing success 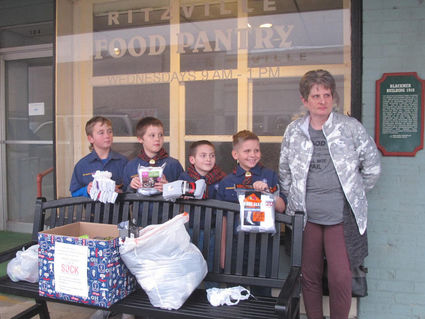 Last Thursday, January 17, under cloudy skies and an incessant chilling rain, four young Scouts scrambled out of their vehicles to deliver the end of their campaign to collect pairs of socks to be passed out to those in need at the Ritzville Food Pantry. They called their project "Box for Sox." To collect the socks, they left marked cardboard boxes at locations around town: Umpqua Bank, Eagles Lodge, NAPA Parts store, and East Adams Rural Healthcare.

After a photo op, Pete Spain (Jr.), Ronnie Jones, Wyatt Gibler, and Carter Krause presented over 100 pairs of socks to Carol Ewing at the Fo...