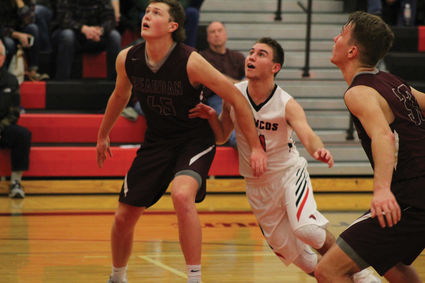 The Lind-Ritzville/Sprague Broncos basketball team improved to 1-2 in league play following its 57-35 home victory over the Reardan Indians on Jan. 4. Above, Broncos junior Austin Thompson fights for positioning in an attempt to grab an offensive rebound.

The Lind-Ritzville/Sprague Broncos returned from a long break this past weekend with a pair of home games, picking up their first league win of the season against the Reardan Indians and falling to the Connell Eagles in a non-league game.

LRS stormed past Reardan on Jan. 4, their first game since traveling to Davenport on Dec. 21, defeating the Indians 57-35. The win improved the Broncos' record in league play to 1-2.

Senior Bryce Kelly led the way in the scoring department for the Broncos with 16 points, while junior Spencer Gering also finished in double figures with 14 points. Four other...