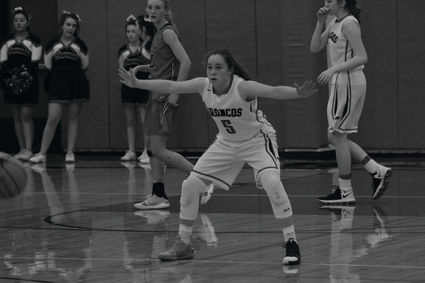 The Lind-Ritzville/Sprague Lady Broncos split a pair of games to open league play for the 2018-19 season, falling to the Liberty Lancers at home but beating the Colfax Bulldogs on the road.

The Lady Broncos now sit at 1-1 in league play and 3-3 overall, as these were the only two league games the team will play until January.

LRS played host to the Lancers on Dec. 11, falling 61-29. The Lady Broncos stayed within striking distance after the first quarter, but were outscored 21-0 in the second quarter to go into halftime trailing 40-11. The second half was much more competitive, with Liberty outscoring LRS just 21-18.

[Liberty] is just a lot better than they were last year," said Lady Broncos head coach Steve Wellsandt. "They're just a level above the rest of the league right now."

Wellsandt didn't think that his team played poorly, but they just weren't able to get much done on the offensive end, which he attributed to Liberty's defense, especially from their guards.

The Lancers came into the game with a 3-1 record, and they went on to decimate the Tekoa-Rosalia Timberwolves 65-18 following their win over the Lady Broncos to improve to 2-0 in league play (5-1 overall). Maisie Burnham scored 29 points to lead the Lancers in their win over LRS.

But the Lady Broncos were able to overcome the tough loss three days later on Dec. 14, as they traveled to Colfax and knocked off the Bulldogs 56-50. LRS played a strong first half, taking a 36-27 lead into the third quarter. The 36 points that the Lady Broncos scored in the first half were more than they scored in four quarters against Liberty.

The second half was a much tighter affair, as Colfax cut their deficit to just two points heading into the final quarter. But the Lady Broncos played great defense in the game's last eight minutes, limiting the Bulldogs to just five points in the fourth quarter and outscoring them by four.

Wellsandt was proud of how his team responded against the Bulldogs after Tuesday's loss, especially because of how difficult it is to play in Colfax. The team switched from a man-to-man to a zone defense following the first quarter, partly because the Lady Broncos were having serious issues with foul trouble early on.

Galbreath bounced back for LRS, leading the way offensively for the Lady Broncos with 20 points. Killian and Schafer joined her in double-figures, as they scored 13 and 14 points, respectively. Killian shot 6-9 from the field in the game. Combined, the three players accounted for 47 of the team's 58 points.

As a team, the Lady Broncos shot 17-34 from two-point range and were 3-9 from beyond the arc, while making 15 of their 31 free throws. Wellsandt was discouraged about being outrebounded and giving up more turnovers than usual, but overall was pleased by what he saw from his team in the win.

"I thought we were really balanced offensively," said Wellsandt. "Dakota really gave us a spark offensively. I was happy with [the team's] effort, and I've been happy with it all season long. The girls have been working really hard."

The Lady Broncos play two non-league games before they take a two-week break. They took on 1B opponent Almira/Coulee-Hartline at home on Dec. 18, and travel to Davenport to take on the Gorillas on Dec. 21. Both games are scheduled to tip-off at 6 p.m.