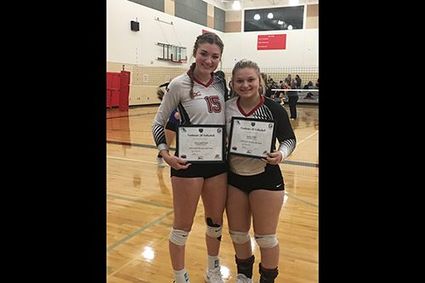 The Lind-Ritzville/Sprague Lady Broncos volleyball season came to an end last week, but not before the team’s spirited run deep into the Northeast 2B District Tournament.

The Lady Broncos lost in four sets against the Northwest Christian Crusaders in the tournament’s winner-goes-to-State, loser-goes-home third/fourth place game at St. George’s School in Spokane on Nov. 1. The match was a rematch from the opening round of the tournament in Reardan, when the Crusaders beat the Broncos in straight sets.

LRS had fallen to Colfax twice in the regular season, once in four sets and the other in five sets. Yet it was the Lady Broncos who came out on fire, winning in straight sets: 25-18, 25-17 and 25-22 to move on to face Northwest Christian.

With the victory, which ensured that Colfax wouldn’t be advancing to the state tournament for the first time in 28 years, the Lady Broncos moved on to face the Crusaders for the second time in seven days. Northwest Christian rolled in that first matchup, winning: 25-20, 25-11 and 25-15.

But it wouldn’t be as easy for the Crusaders the second time around, with the Lady Broncos starting quick out of the gate and taking the first set, 25-20. But Northwest Christian was able to right the ship and come back in the next three sets, winning 25-15, 25-15 and 25-18 to take the match and advance to the state tournament.

Killian led LRS in kills with seven, while Galbreath recorded three blocks. Miller was consistent with 15 assists, while Witt piled up 13 digs.

The Lady Broncos finished the season with a record of 11-8, and won seven of their last nine matches to close out the season strong. LRS will tentatively return eight of their 10 varsity players next season, with Miller and Witt being the two graduates. Next year’s seniorsl include Galbreath, Brinley Moore, Ellie Gering and Katheran Gingrich, while two sophomores and two freshman will also be returning from the varsity team.