Lady Broncos on a roll, prep for district play-in game 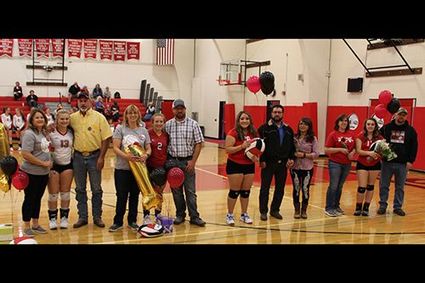 SENIOR NIGHT SUCCESS. The Lady Broncos volleyball team sent its seniors, (above, left to right) Lacey Miller, Kierstin Witt, Cinthia Guizar and Sharon Anderson, out on a high note with a win against Asotin. -Journal photo by Brandon Cline

The Lind-Ritzville/Sprague Lady Broncos are on a roll at exactly the right time as they prepare for postseason play this week.

The Lady Broncos swept all three matches—two of them league matches—last week, and have now won four matches in a row as they prepare for a play-in game to get into the Northeast 2B District Tournament. LRS will play Mary Walker High School at 3 p.m. in Reardan. If the Lady Broncos win that match, they would play later in the day against Northwest Christian, who finished atop Northeast 2B North Division with a league record of 9-1.

“We played [Mary Walker High School] at our preseason tournament in Rosalia, and we beat them and then we lost to them,” said LRS head coach Cari Galbreath. “I do feel like we’re definitely a stronger team with more weapons, and man-for-man I feel like we’re a stronger team. But at the same time every night you never know who’s going to win. It’s the team that brings their game.”

The Lady Broncos got things started last week with a four-set win on the road against the Reardan Indians on Oct. 16. LRS dropped the first set 18-25, but won the final three sets 27-25, 25-12, 25-17 to sweep the season series against Reardan.

In a non-league tilt at home against the Davenport Gorillas on Oct. 18, LRS took care of business handily, dispatching Davenport in three straightforward sets: 25-11, 25-16 and 25-16. The Gorillas finished with a 5-5 record in the Northeast 2B North Division and will play in the Northeast 2B District Tournament as well.

The marquee win of the week for the Lady Broncos came on Senior Night on Oct. 20, as they defeated the Asotin Panthers in straight sets in a league match. LRS was able to exact revenge against Asotin for a brutal five-set loss earlier in the season, winning 25-21, 25-15 and 26-24 to finish league play with an even record of 5-5.

Galbreath once again notched 12 kills in the match, while freshman Dakota Killian had two blocks. Miller and fellow senior Kierstin Witt lit up the stat sheet in their final match on their home court, with Miller recording 21 assists and two aces and Witt finishing with 21 digs.

“It was a great day,” said Coach Galbreath. “Kierstin and Lacey have been a huge part of our program for the past four years, and I think it was just so rewarding. And it wasn’t just those two that played well, but the whole team played well and picked up their game and had a great time. It was so fun to watch that, and they made it look like it was pretty easy for them.”

Galbreath hopes that her team can go into the district tournament continuing to play with the high energy they’ve been playing with during this four-match win streak.

“I think they’re not playing so tense out there,” said Galbreath. They’re playing without regret, and I think that’s helping them succeed and play better.”