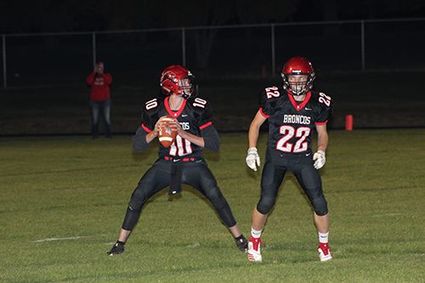 SENIOR QUARTERBACK BRYCE KELLY had a strong outing in LRS’s loss to Liberty on Oct. 12. Above, Kelly prepares to pass as running back Conrad Ziemer blocks for him. -Journal photo by Brandon Cline

The Lind-Ritzville/Sprague Broncos fell at home in their final regular season home game, losing 36-15 to the Liberty Lancers to fall to 2-5 overall and 0-3 in league play.

The Broncos took a 14-point deficit into the half against the Lancers, who scored on touchdown runs from running back Matt Heer in the first and second quarter. The Broncos came out strong in the second half, with wide receiver Austin Thompson scoring on a 23-yard rushing touchdown to pull the Broncos within a touchdown.

The score remained 14-7 midway through the fourth quarter, when the floodgates opened for Liberty. They scored three touchdowns in the final 7:30 of play, with touchdown runs of 52 and 44 yards and a 16-yard touchdown pass. LRS quarterback Bryce Kelly was able to briefly cut the deficit to 14 points, throwing a 33-yard touchdown pass to wide receiver Shontz Yaeger. But the Lancers responded just 14 seconds later and put the game out of reach for good.

Kelly had a solid night throwing the ball, going 17 for 25 with 165 passing yards and the touchdown pass while not committing any turnovers. But LRS ran for just 70 yards on 20 rushing attempts, while Liberty rushed the ball 38 times for a whopping 305 rushing yards.

Broncos head coach Greg Whitmore said his team was able to stick around with the Lancers, but that they eventually got worn down because they weren’t able to compete physically with them for four quarters.

One of the few positives of the game for Whitmore was that the offense came out of halftime and put a quality drive together to get within a touchdown of Liberty.

“We came out in third quarter and put a really nice drive together,” said Whitmore. “We had a little momentum, but then they just exposed our weakness, which is our size and strength. We just can’t get teams off the field, and they’re running it and running out the clock and grinding out first downs.”

The Broncos have a bye this week before closing out the regular season on the road against the 5-2 Asotin Panthers. Whitmore said that the team won’t be practicing on Tuesday or Friday this week due to the bye, and hopes that the team is able to come into the game against the Panthers fresh and healthy.

“We just have to keep plugging away and try and scratch and claw and play hard and hopefully things go our way and we can go on the road and beat a really tough Asotin team,” said Whitmore.