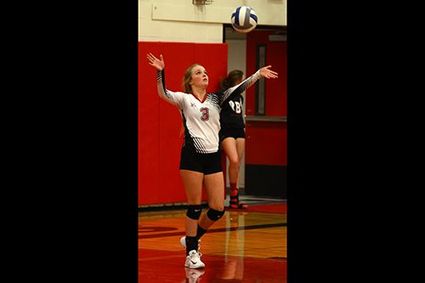 THE LADY BRONCOS VOLLEYBALL TEAM split a pair of league matches at home last week, as they beat Tekoa-Rosalia in straight sets while falling to Colfax in a five-set heartbreaker. Above, Junior Brinley Moore serves the ball. -Journal file photo

The Lady Broncos started off the past week with a dominant performance over the Tekoa-Rosalia Timberwolves, winning in three sets at home on Oct. 2: 25-9, 25-18 and 25-14. LRS has now swept the season series against Tekoa-Rosalia, winning all six sets played between the teams.

LRS faced a stiff test two days later on Oct. 4, as they faced off against the Colfax Bulldogs for the second time this season. The Lady Broncos fell to the Bulldogs in the first match on Sept. 18, losing in four sets.

The rematch was a back-and-forth affair, as Colfax and LRS traded shots back and forth. The Lady Broncos won the first set 25-21, but the Bulldogs came right back and took the second set, 25-21. LRS struck back and took the third set 25-23, but Colfax yet again answered the call and won the fourth set, 25-17. The fifth and deciding set went to Colfax, 15-9.

Galbreath yet again led the way offensively for LRS, finishing with 11 kills and three aces. Miller had 15 assists and 24 digs.

“I felt like we were in control most of the time, and we just couldn’t seal the deal,” said Galbreath. “And even looking at the stats, we had more aces, we had more assists, we had more kills, but we still ended up losing. So it’s just unforced errors that got us.”

LRS also traveled to Pasco to play Tri-Cities Prep in a non-league match on Oct. 6, falling in three sets: 25-9, 25-14 and 25-19. Galbreath said that it felt like the team was on vacation and played with no energy.

“I feel we’re growing as a team, besides the performance against Tri-Cities Prep,” said Galbreath. “But we’re just trying to get those unforced errors under control, getting the confidence back and being mature enough to finish.”

Galbreath said that she’s just trying to understand the reasons why the team hasn’t been able to finish out close matches this season.

“I’m just trying to see what they’re thinking, because as a coach it’s definitely frustrating, and I know they realize it’s a missed opportunity,” said Galbreath. “But I feel like as a group they always work hard and they want to win, it’s just figuring out how to keep executing and keeping their level at a high gear, and not taking their foot off the gas when we’re ahead.”

The Lady Broncos go on the road to take on Liberty in their only conference match of the week. Galbreath said that her squad didn’t play very well against Liberty the first time they met this season, which she says Homecoming Week may have attributed as to why not.

“I think they understand the importance of this game and hopefully it will be an opportunity where we can finish and gain more confidence,” said Galbreath. “However, playing at Liberty is always a difficult environment to play in. They bring a good crowd and everything.”

“Senior Night is the last time, possibly, that these seniors will ever play on their field. They’ve put a lot of time out on the field...so the emotional part should kick in a little bit, knowing it could be your last [home game.] And I think when you know something could be your last, you subconsciously put a little more effort into it.”