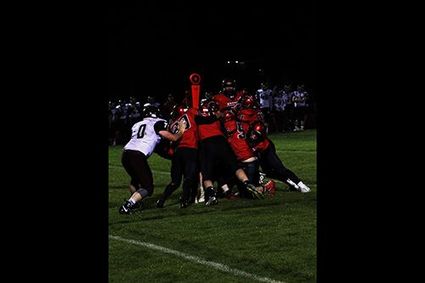 THE BRONCOS FOOTBALL TEAM fell to the Reardan Indians squad 24-14 on Oct. 5. Above, the Broncos defense swarms the Indians running back in the second quarter of the game. -Journal photo by Katelin Davidson

The Lind-Ritzville/Sprague Broncos fell 24-14 to the Reardan Indians on Oct. 5, as they fell to 0-2 in league play and 2-4 overall.

The Broncos were stellar defensively in the first half, taking a 7-3 lead into halftime against the Indians, who entered the game with a 4-1 record overall (2-0 in league play). But the Reardan offense woke up in the second half, scoring 21 points and pulling away in the fourth quarter.

Reardan got the scoring underway, making a 24-yard field goal with less than a minute left in the first quarter. LRS got on the board late in the second quarter, as quarterba...