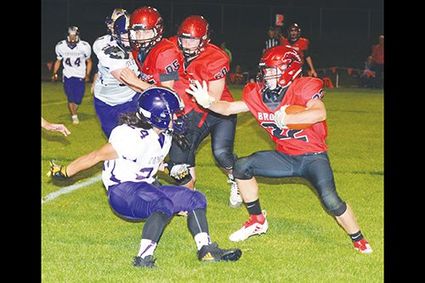 CONRAD ZIEMER manuevers through Columbia-Burbank on a rushing drive for the Broncos on Sept. 21 on Jimmie Snider Field. LRS earned a 20-6 victory against the Coyotes, rounding out Homecoming week with a win. -Journal photo by Katelin Davidson

The Lind-Ritzville/Sprague Broncos secured a 20-6 win against Columbia-Burbank during the Homecoming game on Sept. 21. The game served as the final nonleague contest, before the Broncos move into league competition on Sept. 28.

After a two-game losing streak, Head Coach Greg Whitmore said the Broncos needed the Homecoming win to help boost their confidence moving into a league game against Colfax this week. LRS ends nonleague competition with a 2-2 record.

Whitmore said the team performed well during the game and played with consistency, while also being the team who recovered turnovers instead of made them. Especially on Homecoming night, he stated the Broncos needed the win to help prepare them for a competitive season in league contest.

LRS found success in their passing game, completing 199 of their 250 total offensive yards on pass plays. The team ended the night with 16 pass completions and three passing touchdowns.

The first quarter started as a back-and-forth battle between the Broncos and the Coyotes, with each team remaining scoreless until late in the quarter.

The Broncos earned the first touchdown of the game as Bryce Kelly connected with Austin Thompson for a 47-yard touchdown. With a successful point after kick by Shontz Yaeger, the Broncos secured a 7-0 advantage.

The game would continue with a single touchdown per quarter, and the Broncos’ second touchdown occurred late in the second quarter. Kelly completed a lateral pass to Drew Kelly, who then fired a throw to Yaegar in the end zone for a 35-yard touchdown.

The Broncos moved into halftime with a 13-0 advantage, and Columbia-Burbank would be unable to answer the scoring drive until late in the fourth quarter.

Both teams returned to the gridiron after honoring Homecoming royalty at halftime, and they remained locked in battle. With less than three minutes remaining in the third quarter, Kelly completed a pass to Thompson in the end zone for a 15-yard touchdown, followed by a point after kick from Yaeger.

The Broncos held the Coyotes on downs or forced punts until late in the fourth quarter, when Columbia-Burbank scored on a 13-yard rushing play. Unable to hit the point after kick, the Coyotes ended the night with six points.

On the final possession for the Coyotes, they pushed the ball down field, attempting to break past the Broncos line. Even with fatigue setting in, the Broncos were able to stop the play and secure the 20-6 nonleague victory.

Whitmore said the Broncos not only improved on eliminating turnovers, but also limiting the amount of penalties. LRS’ defense also made significant improvements by stopping rushing plays, making tackles and limiting first down opportunities for the Coyotes.

The Broncos were able to make stops due to new plays created by Assistant Coach Jason Hilzer, and the plays resulted in turnovers on downs for the Coyotes, Whitmore explained. It also allowed the Broncos to have more opportunities on offense, and the team did well protecting the ball.

Yaeger had four receptions for 60 yards, while Conrad Ziemer led the team in rushing yards with 44.

Moving into league competition, Whitmore said the team needs to continue to improve on mental toughness and discipline.

It is especially crucial to remain focused at the end of the games when the team is fighting exhaustion, he added, but the Broncos have to remain vigilant to score as well as limit scoring opportunities for their opponents.

The Broncos start league competition on the road against Colfax. The Bulldogs are an athletic, well-coached team, Whitmore said, and the Broncos will need to add a few plays to keep Colfax off balance.

Whitmore is hoping for the LRS line to help move the plays down field. He said the key to success will be playing a clean game without any mistakes or penalties.

LRS is the underdog going into the game, but Whitmore said the Broncos need to mix up their plays and keep Colfax guessing if they want to earn the win.

In the upcoming weeks, the Broncos will face five league opponents and need to earn two wins in order to move into the Crossover games. Whitmore said LRS is in a strong and competitive league, but believes the Broncos will be able to sneak past opponents with a few wins.

The Broncos travel to Colfax on Sept. 28, with kick-off set for 7 p.m.