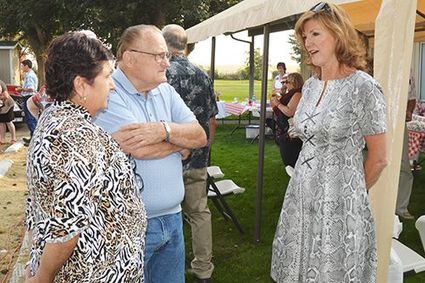 SUSAN HUTCHINSON (right) speaks to Lasting Legacy Wildlife Museum Owner Dr. Donald Sebesta and his wife Sandy during an event at the museum on Aug. 23. Hutchinson is is the Republican nominee running for Washington state Senate against incumbent Maria Cantwell in the Nov. 6 General Election. -Journal photo by Al Stover

Elected officials, and residents of Adams County attended the event, which was hosted by Sherri Brewer, Heidi Hunt, Mike and Connie Klein, and Michele Kiesz. During the event, Hutchinson met with guests and toured the museum.

Hutchinson’s ties to Washington began when her German and Norwegian grandparents settled in Tacoma. She grew up in a military family and later married her husband, Andy, who served in the U.S. Marine Corps.

They lived in the Puget Sound and later moved to Seattle. Hutchinson and her husband have lived in the same Seattle neighborhood for nearly 40 years.

Before her career in politics, Hutchinson worked as a broadcast news journalist for the CBS affiliate KIRO-TV and has earned five Emmy awards for her work.

She was also the executive director for the Charles and Lida Sminoyi Fund For Arts and Sciences for 10 years. She served on the board of the Wilson Center for International Scholars, Gov. Gary Locke’s A+ Commission on Education, and the King County Independent Task Force on Elections.

Hutchinson has served as a volunteer leader on numerous organizations such as the Seattle Colleges Advisory Council, Salvation Army NW and Seattle Children’s Hospital. She was also the Chairman for the Seattle Symphony, and a trustee for the Seattle Army Museum, and Smithsonian Air and Space Museum.

During the event, Mike Klein credited Hutchinson as an effective leader for the Washington State Republican party. He also commended her efforts in building the party’s strongest grassroots team in decades.

Hutchinson addressed the audience, speaking about her role in opposing a proposed state income tax. She also spoke about supporting children’s health and public schools. She also supports military families and understands the cost of war from being a wife and a daughter of men who have served.

Hutchinson explained she is working to bring Washington state issues like mental health care and mismanagement of forests to the forefront. She added she supports the Second Amendment and a citizen’s right to keep arms.

Hutchinson closed her speech by encouraging everyone to vote in the Nov. 6 General Election. She also asked attendees to make sure their 18-year-olds to register to vote.

Washington State Representatives Mary Dye and Joe Schmick spoke at the event. Both Dye and Schmick, who are re-running for 9th Legislative positions in the election, encouraged voters to support Hutchinson and vote on Nov. 6.

Schmick said Hutchinson impressed him for backing President Donald Trump early in his campaign, and encouraged everyone to show her the same support.