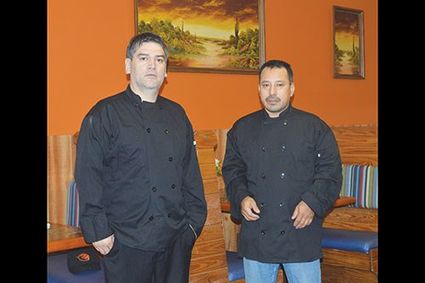 Residents flocked to 214 West Main Avenue on Aug. 8 for the opening of Mi Jalisco, a new Mexican food restaurant in downtown Ritzville.

Mi Jalisco is the newest restaurant to open in the address, which previously housed eateries like Memories’ Diner, Casuela’s Mexican Grill and Circle T Inn.

Co-owners and cooks Fermin Castellon and Mike Angel will run Mi Jalisco’s day-to-day operations. Castellon’s and Angel’s relatives are also working at the restaurant, though they hire additional help in the coming months.

Prior to opening Mi Jalisco, Castellon and Angel worked at Joe’s Fiesta Mexican Restaurant in Pendelton, Oregon. He knew Memories’ was closing and wanted to bring a Mexican restaurant to Ritzville.

He noted the process of opening Mi Jalisco took longer than expected, because he and Angel could only work in the building 1-2 times a week. He also needed to install a walk-in cooler before the restaurant could open the doors.

Castellon explained he repainted the inside of the building, and included decor and paintings on the walls.

He would like to continue to work on the building in the future, but he understands accomplishing the task would take more time and resources.

For fans of traditional Mexican food, Mi Jalisco’s menu has a variety of dishes.

Castellon said the restaurant’s menu is based on items from Joe’s Fiesta Restaurant. He added the owner of Joe’s Fiesta approved him using recipes for Mi Jalisco.

Some of Castellon’s favorite dishes to cook are chicken fajitas, pollo a la crema, and carne asada. His favorite dish is the Express burrito, which consists of ground beef, rice and beans inside a flour tortilla. It is garnished with guacamole, sour cream tomatoes, onions and Parmesan cheese.

The restaurant’s menu features appetizers such as nachos, jalapeño poppers or quesadillas, ranging from $7.50 to $8.95.

Customers who come in during the late morning or afternoon can enjoy the lunch specials priced at $9.75, or lunch combinations or burritos, which costs $9.50.

The restaurant’s dinner menu also features a variety of choices. Customers can order combination meal of a burrito, tacos or tamales, ranging from $12.50 to $12.95. Patrons who seek a lighter meal can order a small combination dish for $9.75.

The restaurant also offers a burger and fries, as well as a children’s options. For dessert, the restaurant has deep fried ice cream.

Although he worked in the restaurant business for eight years, Castellon said he is always learning something when it comes to cooking or running a business.

Aurelio Pena, one of the co-owners, helped run the restaurant during the first week of business. Castellon said former Memories’ Diner owners Scott Gorman and Lori Gorman-Anderson have also helped at Mi Jalisco and answered questions he had about the building and running a restaurant.

Judy Crossler and Ron MacDonald were hoping the restaurant’s first two customers after it opened. Both Crossler and MacDonald said they enjoyed the food and were for a Mexican restaurant to reopen in Ritzville for awhile.

Castellon said he is thankful for the support from the community during the restaurant’s first week of business. He added the positive feedback from customers has made him feel welcome in the city.

Castellon added the community support has motivated him to make Mi Jalisco a successful restaurant. In turn, the pressure motivates him and the staff to do the best job they can to provide quality food and service.

Castellon said he wants the restaurant to stay open in Ritzville for a long time. He also wants to continue to provide good food and service, and build on the support the restaurant has received from the community.