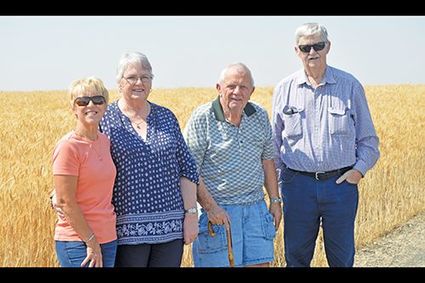 Some people travel from different areas in the United States to watch wheat harvest in Adams County. Harvey and Alison Monssen, they came all the way from the Ballarat, Victoria, Australia, to experience this year’s wheat harvest.

On Aug. 6, the Monssens toured Schoesler Farms outside of Ritzville city limits. During the visit, they watched combines harvest the wheat from the field and Harvey also had the opportunity to ride in a combine.

Alison explained she helped plan the trip through a family friend in San Francisco. The Monssens’ contact was a relative of Gail Schoesler-Gering’s best friend from college.

The Monssens arrived in Ritzville on Aug. 4 and have stayed locally at the Best Western Bronco Inn.

Prior to touring Schoesler Farms, the Monssens met Gerry Schoesler, who showed them around the City of Ritzville. Alison said the people of Ritzville have been wonderful to her and Harvey. She also appreciated Schoesler, and Schoesler-Gering for the hospitality.

Schoesler-Gering described the Monssens as delightful people who showed a vested interest in wheat farming.

Riding in a combine is not a new experience for Harvey. The Monssens used to dry-farm red wheat and barley in Australia. Alison said they also raised white suffolk sheep on the farm.

Harvey, who was a farmer for 66 years, explained his family has farmed the land for 120 years.

The Monssens’ visit to Ritzville stemmed from their desire to see how wheat farming was different in Ritzville, compared to Australia.

Harvey said the process of harvesting wheat is similar between the two countries.

He noted the combines and other machinery used to harvest wheat in the U.S. is the same as the equipment Australian farmers use.