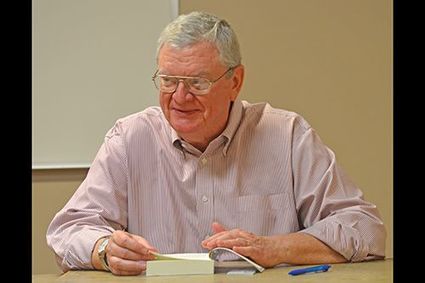 HAGGERTY READS. The East Adams Library District hosted an author reading with Al Haggerty at the Ritzville Public Library on July 16. Haggerty read from his novel “The Failover File,” and answered questions from the attendees. He noted the event at the Ritzville Library was the first time he read his work in front of an audience. -Journal photo by Al Stover

During the event, Haggerty read the prologue and first chapter of his novel “The Failover File.” Haggerty explained he had never read his writing outloud to an audience before he came to Ritzville.

“The Failover File” is Haggerty’s first novel. He described the book as a mystery starring the character Mike O’ Hara, an ex-Navy officer, ex-astronaut, engineer and crash investigator for the National Transportation Safety Board.

In the book, O’Hara and his team find hacked software at a crash scene involving a global mega-corporation. He spends the novel teaming up with software expert Sally Montez to track down the hackers before they can strike again.

Haggerty said “The Failover File” has received positive reviews and even won the 2018 EPIC eBook award in the mystery-thriller category.

Haggerty explained he is from Salem, Oregon, and attended Oregon State University where he met his wife, Pat. He said served in the Navy for over 26 years.

During his time in the Navy, Haggerty was a ship driver for 12 years and rocket science for 15 years. In those 15 years, Haggerty worked on numerous assignments, including the Tomahawk Missile System and Ballistic Missiles Defense Organization.

After Haggerty retired from the Navy, he served in different roles, including as a United State Deputy Undersecretary of Defense at the Pentagon, where he worked in technology security and counter intelligence.

During the question and answer session, Haggerty said he incorporated experiences from his career and life into the book’s descriptions.

He also took accounts his brother, an airline pilot, an used them for the book.

Haggerty said he wrote the initial draft for “The Failover File” over 20 years ago. He marketed the book for a period of time, then “let it sit on the shelf.”

He added the book’s theme was different when he first wrote it. He explained the novel was initially based in science fiction, but changed it after receiving feedback from an editor.

After 20 years on the shelf, Haggerty rewrote “The Failover File” in 3-4 months and later hired an editor.

He explained it is difficult for a writer to edit their own work and collaborating with an editor was the best decision he made.

During the book’s revising process, Haggerty explained the editor told his draft was too technical and asked him to revise it.

With “The Failover File” finished, Haggerty said he is working on a second book in the series with the same characters. He noted the draft of the book is finished and he is currently in the revision process.

The next author reading will be at the Ritzville Public Library on Aug. 18 at 1 pm. The featured author will be Betsy Dickinson, writer of “The Water Master.”