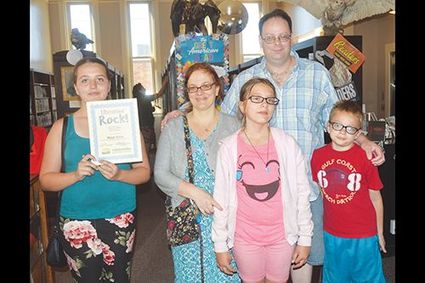 STATE WINNER. Maiah Hilton’s video “Libraries Rock,” was the state winner for the Collaborative Summer Library Program’s (CSLP) 2018 Teen Video Challenge. A celebration for Hilton (left) was held at the Ritzville Public Library, where her family was in attendance.

The CSLP selected Hilton’s video “Libraries Rock,” during the national conference in April.

Her video was posted on the CSLP’s website, along with the other state winners. According to the contest’s website, other community libraries may use Hilton’s video to promote summer reading programs in their area.

For winning the contest, Hilton received a certificate and $100. East Adams Library District (EALD) will receive prizes from CSLP and Demco/Upstart Promotions. The library hosted a celebration for Hilton at the Ritzville Public Library on June 1 where the video was shown.

EALD Director Kylie Fullmer said Hilton was the first local teenager to submit a video in the eight years the library has promoted the contest.

For the contest, Hilton had to produce and submit a video to the Washington State Library website focusing on summer reading and public libraries.

The 36-second video begins with Hilton’s mother, Jennifer, telling her children it is time to read. Maiah Hilton explains to her siblings Charity and Chris how books can take readers on an adventure.

Using illustrations and audio, Hilton provides examples of places readers can go. These include traveling to the jungle, or an ocean. She added books can also place readers into different roles, such as a hero fighting a dragon or a mummy in the desert.

The video’s final shot shows the Hilton and her siblings running to the Ritzville Public Library.

Hilton, who has participated in EALD programs for the last two years, said she entered the contest to try her hand at creating a video.

She explained recording and producing the video was a long process, especially because it was her first time creating one. In addition to the video footage, she and her siblings also drew the different animals and backgrounds featured in four scenes.

After a brief lesson from her father Todd, who owns a video production company, Hilton spent 10 hours alone editing, and adding sound and 3-D effects to the video.

“It was very long and very tedious and you had to plan out every second,” Hilton said.

She added she enjoys reading because stories “can take a person on an adventure.”

She also enjoys editing and creating content. She has written short stories in the past and is currently working on a long-form story.

Hilton said she would like to be a writer when she is older, but thinks it would be more of a side job in addition to a career as a maternity nurse.

When Hilton learned she had won the contest, she was shocked, but also thought “it was really cool.”