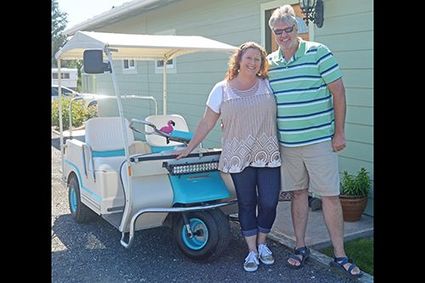 GRAND MARSHALS. Jamie and Greg Schmunk were selected as the Grand Marshals for the 2018 Grand Parade on June 9. The Schmunks stand next to a partially restored 1972 Harley Davidson three-wheel golf cart, which they will ride in the parade. -Journal photo by Al Stover

Lind residents and visitors who line the Town’s streets to watch the Grand Parade on June 9 may notice familiar faces leading the floats.

Jamie and Greg Schmunk were selected as the Grand Marshals for the 2018 Grand Parade.

Both Jamie and Greg said they felt honored at having the opportunity to serve as grand marshals for the parade.

Greg grew up in Warden on his family farm, then moved his family to Lind in 1993.

He worked for the Warden School District for 26 years, starting as a mechanic and school bus driver trainer before becoming the district’s Director of Transportation. He...