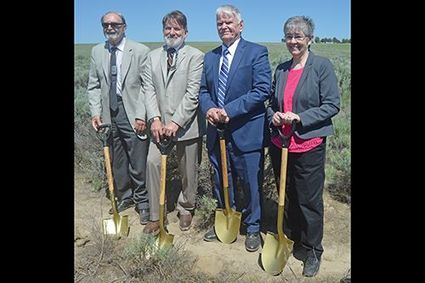 GROUNDBREAKING. The May 24 groundbreaking for the Adams-Neilson Solar Farm was attended by Lind and Adams County officials, residents and representatives. The moving of dirt took place north of Lind, near the Lind-Ritzville Middle School. Local representatives involved were (from left) Adams County Commissioners Roger Hartwig, John Marshall and Terry Thompson, and Lind Mayor Paula Bell. -Journal photo by Al Stover

Officials from Avista Utilities, Strata Solar and elected officials came to the Town of Lind for the groundbreaking ceremony on May 24 for the Adams-Neilson Solar Farm.

The groundbreaking officially began the construction phase for the project, which is located on the north side of Lind. The solar farm is the largest construction project for Adams County in the last 20 years.

Completion of the project is scheduled for November, with the facility coming online in December to begin its 35-year life cycle.

The project’s construction phase will employ about 150 people.

The facility will feature 81,000 solar panels and span approximately 170 acres of land owned by B.J. Heider and leased by Strata for the project’s lifespan. Once the facility is complete, it will be the largest solar power plant in Washington state and will generate enough power to supply approximately 4,000 homes in electrical energy.

In the initial stages of the project, Knight said there were questions as to whether or not the facility would become a reality.

During his speech, Knight praised working with Heider, the Town of Lind, and the Adams County commissioners and staff in the permitting process. He also acknowledged the partnership Strata has built with Avista and appreciated the support from the community.

Once the solar farm is complete, it will serve as a component of Avista’s Solar Select Program, which aims to provide renewable energy to the company’s largest commercial consumers.

He noted Avista is one of only 15 utility companies in the United States offering a renewable energy green tariff designed to meet the sustainability and carbon reduction goals of commercial and industrial electric customers.

Like Knight, Schaffner said he appreciated the cooperation and support from Adams County, the Town and Strata Solar.

In addition to providing renewable energy for Avista customers, the solar farm will generate a 1.25 increase in property tax revenue for Adams County during its lifespan. The increased revenue will benefit the county’s taxing districts and go toward funding county programs.

Adams County Commissioner John Marshall said the project will also bring new interest to the area, as well as “shed some light in the abundance of opportunities and resources in the county.”

The Town of Lind will also benefit from the solar farms presence.

Lind Mayor Paula Bell said the Town plans was recently invited to participate in the Solar Select Program. She added Town will use the energy generated to power the Lind’s wastewater facilities and wells.

Bell said the Town is excited to have the solar farm in Lind and noted it will add a new chapter to the Town’s story.