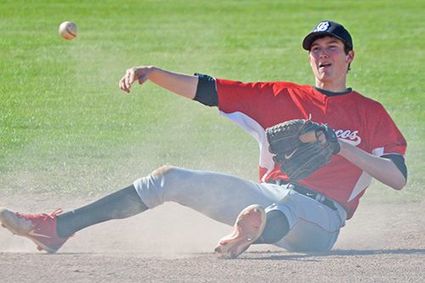 DOUBLE PLAY. Seconds after catching a line drive, Bryce Kelly tosses the ball to first baseman Garrett Frederick to complete the double play during the eighth inning of the Broncos’ first game against St. George’s on April 24. -Journal photo by Al Stover

The Lind-Ritzville/Sprague Broncos baseball team wrapped up their regular season on April 24 by going 0-2 against St. George’s in the last home doubleheader, losing 10-5 and 12-0.

In game one against St. George’s, the Dragons opened with a 2-0 lead and added one run in the third and two in the fifth.

Down 5-1 in the bottom of the fifth, LRS gained momentum after scoring three runs off of Bryce Hansen’s two-run triple and Easton Nelson’s RBI double. Spencer Miller’s single brought Nelson to home plate to score the tying run.