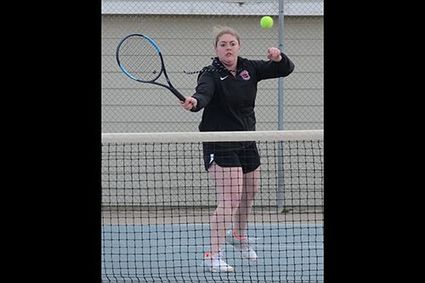 KATHERAN GINGRICH (above) plays aggressive defense during the Broncos’ No. 2 doubles match against Reardan on April 12 in Ritzville. Gingrich and her doubles partner, Megan Buriak, went on to win the match 6-1, 6-1. -Journal photo by Katelin Davidson

The Lind-Ritzville/Sprague tennis team returned to the courts to compete against Harrington, Davenport and Reardan.

The weather has provided the Broncos with challenging outings, as well as forcing them to cancel matches, but that has not stopped the team’s success on the court.

The Broncos faced Harrington on March 27 in a nonleague match, and recorded wins for both the boys and girls teams. The Bronco girls won the match 4-1, while the boys secured a 3-1 victory.

Head Coach Lorrie Swanger said amidst the cold and windy day, the singles players had strong competition and success. She...