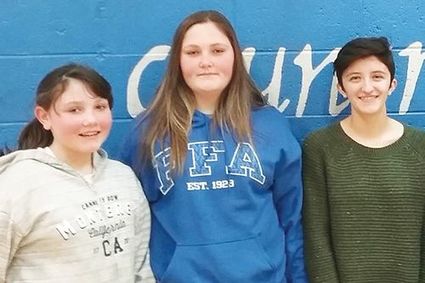 She rehearsed and performed with 149 other students chosen from throughout the state. Their conductor was Judy Hafso who teaches at St. George’s School in Spokane.

Jersey Hamilton, grade 9 on trumpet, and Van Hollebeke, grade 10 on oboe, performed in the Southeast Region High School Honor Band at Colfax High School on March 12, under the direction of Dr. David Turnbull from WSU.

She also was recently selected for the prestigious Music in May Honor Festival at Pacific University in Forest Grove, Oregon, that will take place May 24-26.

Jersey Hamilton won the trumpet solo category at the Southeast Region Solo/Ensemble Festival in February. She will compete at the State Solo Competition at Central Washington University April 28.