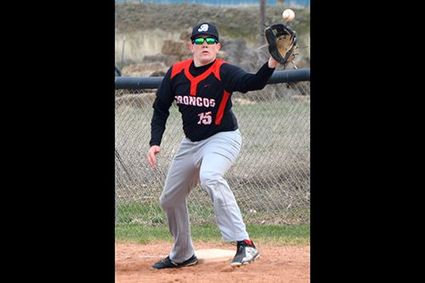 BRONCO PICKOFF. First baseman Easton Nelson is seconds away from catching the ball thrown by pitcher Garrett Frederick and tagging out an Asotin baserunner during game one of the Lind-Ritzville/Sprague’s doubleheader against the Panthers on March 31. -Journal photo by Al Stover

The Lind-Ritzville/Sprague Broncos baseball team had two more bumps in the road after Asotin swept them in a Northeast 2B South League doubleheader on March 31.

The Panthers defeated the Broncos 6-0 in the first game, followed with a 5-0 shutout in the second contest of the day.

The two losses put LRS at 0-2 in league play.

In game one, Asotin jumped out to a 3-0 lead in the first inning. After LRS’ defense kept the Panthers from adding to the score in the second and third innings, Asotin added one insurance run in the fourth and two more in the fifth.

LRS’ offense continued to struggle in game two. The Panthers scored one run in the first inning and two more in the third inning. Asotin added insurance runs in both the fourth and fifth innings.

Despite the losses, Head Coach Jason Aldrich said he felt the Broncos played well against the Panthers.

He noted Asotin is a team who can make contact with the ball and hit it far into the outfield. Despite facing a hard-hitting team like the Panthers, he said LRS played good defense in both games.

The Broncos only had one hit in both games. Aldrich noted part of LRS’ struggle at the plate was due in part to Asotin’s pitchers, who he said can pitch as fast as 70-80 miles per hour.

Starting pitcher Garrett Frederick took the loss on the mound while Easton Nelson closed the seventh inning. Aldrich said Frederick had a rough start on the mound, but he settled down and adjusted his pitching after the first inning.

Aldrich said the Panthers, who are tied with Colfax for first place in the NE 2B League standings, are one of the toughest teams in the 2B classification and will likely make it to the semifinals in the State Tournament.

“To hold them to six runs and five runs is a win for us,” Aldrich added.

Although the Broncos will not play against Asotin for the remainder of the regular season, he said there may be a chance LRS will face the Panthers at Regionals. In order for that to happen, Aldrich said the team will need to focus on improving their hitting during practice.

LRS will travel to Reardan on April 7 to play the Indians in a league doubleheader.

Reardan is currently 0-4 in league play, losing doubleheaders to Colfax and Liberty.