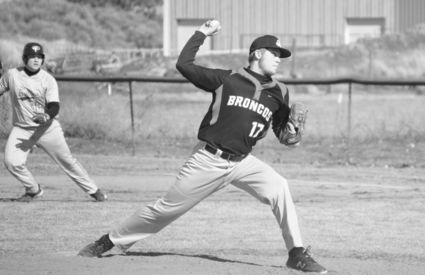 STARTER. Garrett Frederick was the starting pitcher for the Broncos during their March 10 home opener against Kettle Falls. Frederick would pitch for the first three innings and was relieved by Bryce Hansen during the fourth inning.

The Lind-Ritzville/Sprague Broncos baseball team opened their regular season on March 10 with a 13-2 Northeast 2B League loss against Kettle Falls at Bob Heider Memorial Field.

Kettle Falls jumped to an early lead after they scored two runs in the first inning.

The Broncos prevented a shutout in the bottom of the inning after Easton Nelson’s single brought Bryce Hansen to home plate.

LRS’ defense kept Kettle Falls from scoring until the fourth inning when the Bulldogs put up one run. Kettle Falls went on a rally, adding five runs in the fifth inning to boost their lead to 8-1.

The Broncos’ bats started to rattle in the bottom of the fifth inning. After Jay Harder and Camden Smith hit back-to-back singles, Hansen followed with an RBI double to bring the Broncos their second run of the game.

After a scoreless sixth inning, the Bulldogs secured the win with five more runs in the seventh inning.

Head Coach Jason Aldrich said it was a close game in the beginning, but it came down to two bad innings for the Broncos’ defense where they gave up multiple runs.

Starting pitcher Garrett Frederick took the loss on the mound. Aldrich said he felt Frederick pitched a solid three innings and had more strikeouts than he did base on balls.

Hansen came onto the mound during the fourth inning to relieve Frederick. Aldrich said Hansen found himself in trouble early during the Bulldogs’ four-run fifth inning.

Nelson relieved Hansen and made the final two outs to close the inning. During the sixth inning, Nelson managed to make the three outs in quick succession.

Aldrich said Nelson became tired and was elevating his pitches during the seventh inning. Smith came onto the mound after Nelson to get the final two outs and close the inning.

Aldrich said one of the goals during the game was to have all three Broncos pitchers throw between 40-45 pitches, which they accomplished, but added the bullpen had several walks during the game.

Another contributor to the Bronco’s loss were the four defensive errors. Aldrich said while errors happen in a baseball game, LRS will need to work on reducing them and backing up the pitcher when the ball is in play. He explained working on routine plays and not dropping fly balls can help mitigate those errors.

Aldrich said the infield also needs to be more aggressive when it comes to making the outs.

One area the Broncos will focus on during practice will be defense, specifically reducing errors and allowing their opponents to score less runs.

The Broncos competed in a jamboree in Connell on March 13.

Aldrich expects Connell to be a tough team this season as several of athletes from the 2017 Eagles’ squad returned to their lineup this season.

He added the Broncos will need to tack on hits, play solid defense and pitch well against their both of their opponents. He said the jamboree is also a good opportunity for LRS to play a team outside of the NE 2B League.

Despite NWC losing their first two games, Aldrich expects the Crusaders to be another challenge for the Broncos.