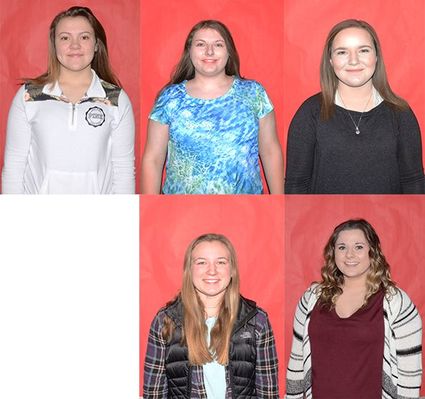 Tickets are available for $10 from any participant and at Northwest Farm Credit Services. Any remaining tickets will be sold at the door of the 7 p.m. event.

The program is now being held in Lind in order to accommodate a larger crowd, as last year’s event was standing room only.

The Sophomore Sisters who will be assisting the participants are Alibama Rushing, Katheran Gingrich, Brinley Moore, Diamond Spain and Molly Hane.

There are also five Little Sisters participating in the program. They are Addy Colbert, Alyssa Williams, Zoe Galbreath, Chloe Hoeft and Alayna Kiel.

The Master of Ceremonies is Gordon Killian, and Megan Buriak and Alarah Pierce-Pulliam will provide “Forget Me Nots” during the program. The program chairperson is Lisa Killian.

Contestant one is Chelsie Watterson, who is the daughter of Rainie Thompson and Travis Watterson. She has three brothers, Kyler, Riot and Travis, and three sisters, Faith, Olivia and Truly.

Watterson is still deciding which college to attend, but she hopes to learn how to cut hair and open her own barber shot one day.

Watterson’s favorite song is “Million Reasons” and her favorite musician is Adele. She enjoys reading “The Weight of Silence” and watching the movie “50 First Dates.”

Her favorite magazine is “People” and her primary news source is KHQ.

Her activities include working on a farm, wrestling, drawing, painting, singing, swimming, fishing and HOBY. Her achievements are receiving the Principal’s Award, second place in wrestling and serving as a Derby Royalty Princess.

Her public service activities include writing letters to members of the military and her other interests are cutting hair, painting, dogs, space and science.

Contestant two is Else Gielisch, who is the daughter of John and Pauline Gielisch. She has four sisters; Lisei, Heidi, Gretchen and Marlene.

Gielisch has not determined where she will attend college, but she hopes to become a chemist.

For her talent, Gielisch will be singing at the program.

Gielisch’s favorite song is “Jesus Take the Wheel” and her favorite band is Imagine Dragons. She enjoys reading “Warriors” and watching “Transformers” the movie.

Her favorite magazines are “New Era” and “National Geographic”, and her primary news sources are Fox News and CNN.

Contestant three is Kelcee Carlson, who is the daughter of Chauna and Andrew Carlson. She has a brother, Hagen, and sister, Maycee.

Carlson plans to attend the University of Georgia to study to become an occupational therapist.

For Saturday’s performance, Carlson will be dancing as her talent.

Carlson’s favorite song is “Perfect”, and she enjoys the poem “Risk”. She also enjoys reading “Crashing Tides” and her favorite movie is “My Girl.” She also like the TV show Fixer Upper.

Her primary news sources are Fox News and The Blaze.

Her activities include softball, reading and summer league softball. Her achievements include Student of the Week and volleyball manager.

Carlson’s public service activities include assisting at the local food bank and making centerpiece arrangements for the Ritzville Rodeo Association’s annual banquet. Her other interests include spending time with family, playing softball, and reading books that have happy endings.

Contestant four is Kierstin Witt, who is the daughter of Kendrain Summers and Jason Witt. She has three brothers; Andrew, Hunter and Traiven.

Witt has not determined which college she will attend, but she plans to pursue a career in physical therapy.

Her talent at the program will be performing a monologue.

Witt’s favorite song is “I Like Me Better” and her favorite musician is Aaron Watson. She enjoys reading “Irena’s Children” and watching the movie “Hidden Figures.”

Her favorite magazines are “Better Homes and Garden” and “National Geographic”, while her primary news sources are “The Ritzville Adams County Journal” and KREM 2 News.

Her activities include volleyball, USA Youth Education in Shooting Sports, FFA, Amateur Trapshooting Association, working at the Ritzville Drug Store, and being a member of the National Honor Society.

Her public service activities include a t-shirt fundraiser, volunteering at the gun club’s annual dinner, helping make blankets for the Ronald McDonald House, making baked goods for the Veterans Day assembly and volunteering at the Pheasant’s Forever banquet for 10 years.

Witt’s other interests include trapshooting, hunting, contributing to team sports, and spending time with family and friends.

Contestant five is Madison Melcher, who is the daughter of Robert and Angela Melcher. She has a brother, Hayden, and sister, Megan.

Melcher plans to attend International Air and Hospitality Academy in order to pursue a career of being a flight attendant.

Her talent at the Saturday night program will be performing a country hip-hop dance.

Melcher’s favorite song is “Big Girls Don’t Cry” and her favorite musician is Nicki Minaj. She enjoys reading the book “To Kill a Mockingbird” and watching the “Pitch Perfect” movie series.

Her favorite magazine is “People” and her primary news sources are Fox News and Facebook.

Her favorite modern personalities are Allison Nichols and her Grandma Peggy. Historical personality favorites are Walt Disney and Rosa Parks.

Her public service activities include being a Bi-County leader, blood donor and fair royalty member.

Melcher’s other interests include traveling, art, spending time with family, going to the lake, shopping and photography.