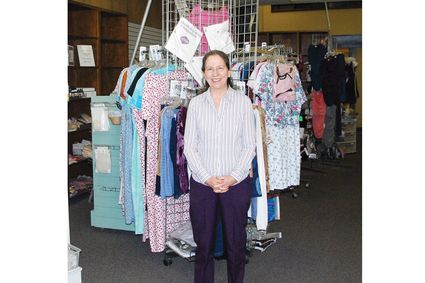 BIRTH AND BABY. P.J. Jacobsen stands in the building she hopes is the last home of her and her husband’s store Birth and Baby, which is celebrating 30 years on March 1. -Journal photo by Rachel Plager

Thirty years ago Jake and P.J. Jacobsen started a store by the name of ‘Babikis’ in Seattle, which sold natural fiber clothing.

At this time there was a very small section of clothes for mothers and the remaining stock was geared towards babies.

The Jacobsen’s then added a second store with older children’s clothing called ‘Kinderkis.’

Babikis and Kinderkis is Africana for “little baby” and “little kid”.

When the recession hit the two decided to downsize to just one store while they raised their children.

P.J. found a passion for helping mothers through raising their children while she did the same. She continued to sell nursing bras from inside their home.

After raising seven children, P.J. knew she wanted to be able to offer all mothers options when it came to breast-feeding their children.

Her goal became to support every woman in her choice with breast-feeding. She discovered there were so many different options and something to help in every situation.

While the stock of the store began taking over their home, their oldest son decided he wanted to become a web designer.

His first project was to design an online space for Birth and Baby. After the website launched in 1997 P.J. discovered 75 percent of her business was taking place online even with a storefront in a mall in the Seattle area.

At this point Jake and P.J. decided they did not need a fancy store front for this business to be successful.

Ten years ago, Birth and Baby moved to Lind. The Jacobsen’s found the Methodist church located on I Street listed on eBay and made an offer.

They have slowly remodeled the building to fit their needs and in the meantime P.J. found another passion for quilting.

When a building on I Street in the main part of town became available they decided to purchase the location to move Birth and Baby to.

P.J. hoped this would be the last time the store moved.

They have been working on the building at 119 North I Street for three years and have been able to organize their stock and have a fitting room for mothers who are able to come into the store.

Once again, P.J. still finds most of her business taking place online. Only now she said it is about 95 percent of her customers.

She offers a fitting formula she came up with so as to find the right bra for each woman shopping on her site. She offers shipping for just $2 and works hard to make sure each product is what her customer needs by offering free exchanges.

P.J. has even begun designing maternity wear for nursing mothers. When in her store you will see the familiar Birth and Baby name adorned on the tags of some of the clothing as well as a number of bras.

In order to ensure she can help each woman who comes to her P.J. became a Certified Lactation Consultant just two years after the training was offered in 1982.

This has fueled her passion and has allowed her to advise mothers in their nursing journey with not just experience but also training.

P.J. is an avid member of the La Leche League, which is the most recognized world group authority on breast-feeding.

She runs monthly meetings in the Tri-Cities and her group is one of the largest in the state. The group offers support not just for breast-feeding but anything else a mother needs.

P.J. also serves as a doula and acts as a support person during births and assists with prenatal care.

Birth and Baby has over 75 styles of nursing bras and contains anything related to breast-feeding. P.J. said those who do come into the store are surprised by how much merchandise is offered for mothers.

P.J. said what keeps her going is knowing how much these items can help mothers.

There have been so many neat products created over the years to help mothers and she is happy to be able to share them.

On March 1, Birth and Baby will host a celebration from 10 a.m. until 8 p.m. for those who would like to stop in and congratulate Jake and P.J. on a successful 30 years.